Healdsburg Kiwanis Club
It was the year 1923.  The United States was enjoying prosperous times between World War I and the depression years that were to follow 1929.
It was the year Calvin Coolidge became President and marked the beginning of the Golden ‘20’s, a period in which the United States Government collected more money than it spent and actually paid off some of the national debt.
In early June 1923, two men arrived in Healdsburg with the intention of forming a Kiwanis Club in the community.
Nathan Combs, Napa District Attorney, and Frank Kean, the State Organizer for Kiwanis, had come to tell the story of Kiwanis.  Napa had organized a club in 1922, and was anxious to sponsor other clubs in the North Bay area.  They met first with Joe Miller, George Imrie, Dr. Julian Wright, and Fred Young.
At a later meeting on June 25th at the American Legion Club House there were 15 members of the Napa Kiwanis Club present and the again the story of Kiwanis was told to a larger group of local business and professional men.
On June 29th, 1923, a meeting was held and the following permanent officers were elected: Joseph Miller, President, George Imrie, Vice President, Charles Comstock, Secretary, Mike Cummings, District Trustee, and George Hayes, Treasurer.
The Healdsburg Kiwanis Club was chartered on November 3, 1923 with 60 members.  The principal reason for Kiwanis then was to render service to the community and it didn’t take long for the Club to get down to real business and begin the legacy of community service.
Meetings were held in the Plaza Hotel dining room during the first year of existence.  Meetings were moved to the American Legion Hall in the winter of 1924.
On our 90th birthday, we honored our founders and celebrated the thousands who have made the Healdsburg Kiwanis Club such a great and lasting organization.  We look forward to our 100th anniversary in 2023 and many more anniversaries into the future.
Healdsburg Kiwanis Club, November 3, 1923, Charter Night. 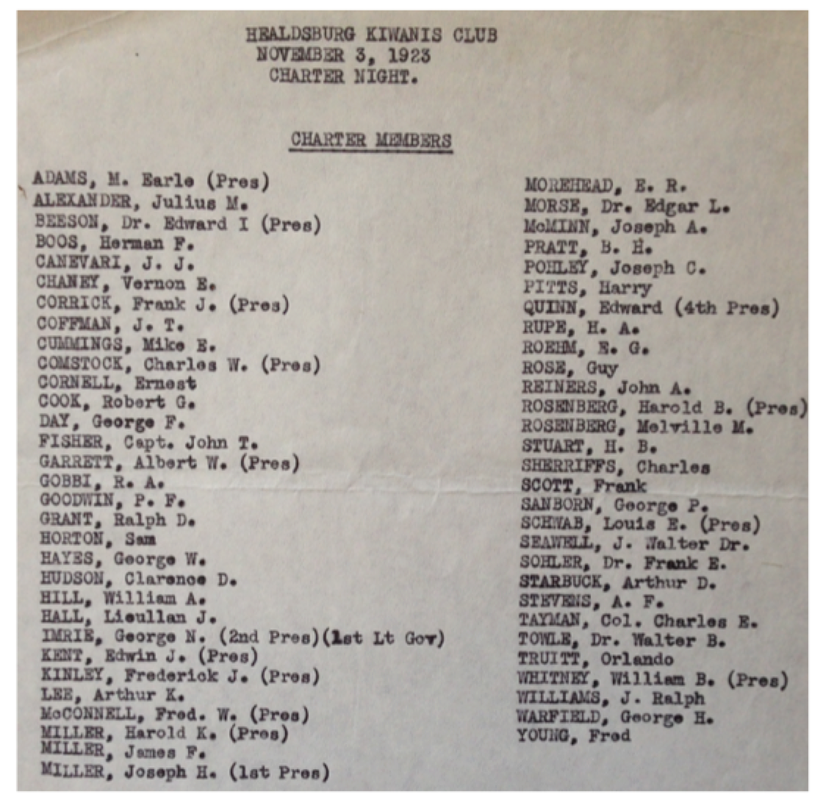